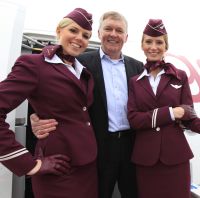 Germanwings, the domestic division of Lufthansa, has started to introduce a new colour scheme for its aircraft fleet.

Chosen for the honour as lead aircraft was Airbus A319 ‘Whiskey Tango’ or officially D-AGWT.  It is the first plane to bear Germanwings’ latest typeface and on its tail the new logo – a stylised W in dark purple and yellow, making the ‘wings’ in Germanwings a swish new motif.  The new design embodies Germanwings’ steadily growing position as a quality carrier amongst low-cost airlines.

From the middle of this year, the airline will gradually take over all peripheral European routes from its parent company Lufthansa.  Germanwings’ fleet will then grow to almost 90 aircraft. www.germanwings.com