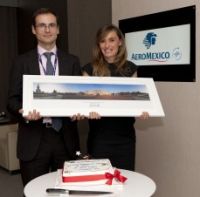 Just before the holiday break Aeromexico introduced their much anticipated three times per week service non-stop from Heathrow to Mexico City.  For the first time for some years British Airways will face competition to one of the eight largest emerging markets in the world.

Aeromexico, a founding member of SkyTeam, is based at Terminal 4 with 12 other members of the Alliance.  It operates over 600 daily flights to 45 cities in Mexico.  Later this year the airline is introducing the Boeing 787 with London earmarked as one of the first services.

Despite Mexico’s position as Latin America’s second largest economy, Britain currently supplies less than 1% of its imports.  Better flight connections will therefore be vital in helping the UK to meet its pledge to double bilateral trade with Mexico to US$4.2bn by 2015.

Colin Matthews, Chief Executive Officer of Heathrow, said:  “We are delighted to welcome Aeromexico to Heathrow.  The centre of gravity in the world economy is shifting and Britain should be forging new links with economies like Mexico.  But with this single deal taking four years to complete, the UK’s lack of hub airport capacity is causing us to fall further behind the rest of Europe”. www.aeromexico.uk.com