Perhaps in a bid to upstage future oneworld partner airline Qatar, early last week British Airways revealed layouts for the Boeing and Airbus A380 fleets it is starting to receive during 2013.

In a well publicised event several days later the Doha-based carrier unveiled the real Dreamliner at Heathrow T3, something special.  Neither plan to include First Class, at least initially.

British Airways will standardise 14 First Class seats in the A380, clearly not taking up the suggestion of Concorde Class, as a marketing ploy put forward by Business Travel News.  It will be an upgraded version of the much praised current offering.

The first of 24 Dreamliners is due in service by June and the lead A380 of 12 on order in August.  All will feature a Club World cabin, similar to the airline’s new Boeing 777ERs currently being introduced

On the A380, surprisingly, with most other airlines confining Economy to the main (lower) deck, BA will offer World Traveller upstairs behind Club World and World Traveller Plus, accepted as the quietest section of the aircraft and bound to be very popular.

Please click below to view the layout for the Airbus A380. 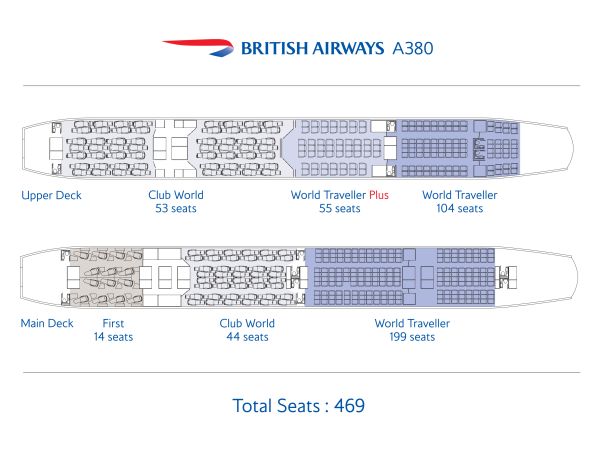