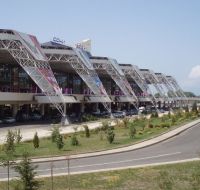 Well in advance of the 2014 Winter Olympics, Rezidor has opened the 508-room Radisson Blu Resort & Congress Centre, Sochi.  Enjoying a prime waterfront Black Sea location the stunning property is all set to become a major landmark.

Known as the ‘Pearl of the Russian Riviera’ Sochi is undergoing a major transformation from a regional tourist hub into a global tourism destination in preparation for the 2014 Winter Olympics.

Massive works are underway to improve the infrastructure and create modern attractions, including the construction of an Olympic Park on the Black Sea, theme parks and enhanced ski facilities. The first Russian Formula 1 Grand Prix is planned to be held at the end of 2014 on a race track winding around the Olympic Park.  Sochi’s main stadium will also host the 2018 FIFA World Cup football finals. www.radissonblu.com