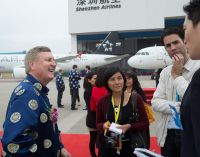 Hard on the heals of Sky Alliance's dalliance with Xiamen Airlines (see BTN 26 November), Shenzhen Airlines, based at the airport of the same name, has officially become part of Star Alliance.  Sister company Air China is already a member.

Shenzhen Airlines dates from 1992 and is China’s 4th largest airline.  It currently operates a mixed fleet of both Airbus A320 series and Boeing 737s, more or less split evenly over a fleet of 128 aircraft.  According to Shenzhen Airlines’ development blueprint, it will expand its fleet to 170 passenger planes by the end of 2015.  It also plans to introduce wide-body in due course.

With the addition of Shenzhen Airlines, Star Alliance now has 27 members. http://global.shenzhenair.com