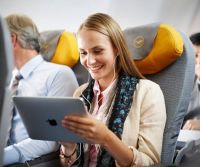 Lufthansa is continuing to roll out its FlyNet broadband internet service across its intercontinental network. Two years after its launch the airline is now able to offer connectivity on 80 aircraft in the long haul fleet, thus making it the largest broadband enabled international operator in the world.  From the middle of December onwards, satellite coverage for the high-speed system will be generally available across Lufthansa’s entire International network (with the exception of China and South Africa).

New Boeing 747-8s joining the fleet will already be equipped with FlyNet.

English speaking Lufthansa clients can now take advantage of Sport 24.  The live sports channel is integrated into a free portal and can be received via wi-fi on a personal tablet or laptop.  Sport 24 has exclusive global broadcast rights for major sports events, provides live coverage of Formula 1 races, the NFL Super Bowl, Wimbledon, the French Open tennis tournament and the Ryder Cup and US Open golf events.  It also transmits German Bundesliga games as well as English Premier League matches.  By next spring, Sport 24 coverage will be available on all FlyNet aircraft.