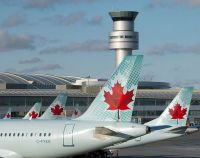 Air Canada is to embark on a major expansion of its international services next summer.  The carrier is launching a new non-stop route between Toronto and Seoul, starting a service to Istanbul, adding seven weekly departures to Beijing from Toronto and Vancouver, and upgrading its Calgary – Tokyo Narita route to provide a daily service.

"Air Canada is seizing the opportunities of the Pacific Century with the most far-reaching international expansion of its schedule in its 75-year history.  Our new routes embrace the world from Istanbul to Seoul and deepen our already extensive Asian service, said Ben Smith, Executive Vice President and Chief Commercial Officer.

“With our Asia expansion alone, we will be flying 11 daily departures or more than 43,000 seats a week across the Pacific Ocean this summer – a commitment of up to 14 wide-body aircraft”.

Canada's flag carrier is the 15th largest airline in the world and in 2011 carried more than 33m customers.  Air Canada provides scheduled passenger service directly to 59 Canadian cities, 56 destinations in the United States and 63 cities in Europe, the Middle East, Asia, Australia, the Caribbean, Mexico and South America.  Air Canada was a founding member of Star Alliance. www.aircanada.com