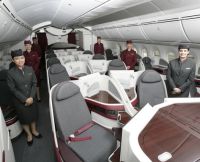 The eagerly awaited Heathrow inaugural of Qatar Airways Boeing 787 long haul operations is expected to take place on Thursday 13 December with the airline bringing in its first Dreamliner from Doha.  Arrival is expected around 11:00 with the plane positioning to Terminal 4.

Currently the aircraft is undertaking ‘shake-down’ flights in the Gulf region and will also probably make an appearance at MEBA in Dubai prior to what is the start of the first 787 scheduled services into the world’s busiest international airport.

Guests at the airport for the arrival are expected to include senior officials from oneworld and its member airlines.  Qatar is set to become a full member during 2013.

In anticipation of the 787 introduction Qatar earlier this year opened at T4 an exclusive executive lounge, rather like the aircraft it is supporting, likely to be award winning in the future.  Guests arriving for the inaugural will also see a major upgrade to what some now perceive as the best terminal on the airport, an innovative ceiling in the international departure lounge with more than 800 LED lights, capable of creating over 16 million colours, creating a unique ambiance designed to mimic natural changes in daylight. www.qatarairways.com