Athens to New York by Qatar 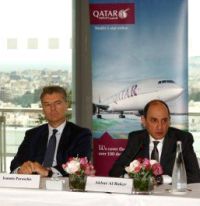 In what can only be described as a surprise move oneworld newcomer Qatar Airways announced last week that it would introduce flights between Athens and New York next year.  JFK is likely to be the New York designated airport, the route operated by Boeing 787 aircraft.

The announcement comes just weeks after Delta Air Lines suspended its own operations on Athens – New York after switching its year-round offering to a seasonal summer only service.

At a press conference at the Athens Hilton Hotel, Akbar Al Baker, Chief Executive Officer, Qatar Airways, revealed the surprising news to introduce the new route as the carrier celebrates the eighth anniversary of its operations to the Greek capital.  “Qatar Airways supports Greece with its presence not only in the good times but also in the crisis period”, he said, adding: “We will continue to support our presence in Greece, creating new jobs as well”. www.qatarairways.com