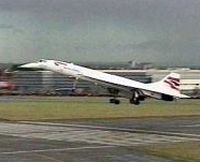 A French appeals court has absolved Continental Airlines of blame for an Air France Concorde crash in 2000 that killed 113 people and cleared a mechanic at the US airline of the charge of involuntary manslaughter.  This is the legal end of a controversy that has not gone away.

All Concordes were grounded on a September day that coincided with the Farnborough Air Show.  Modifications took place.  The next passenger flight of the aircraft, from Heathrow to New York, took place on 11 September 2001, with BA staff on board, landing in the morning.

The timing was such that expected press coverage never took place!

The aircraft returned to service in November 2001 but was not a commercial success with Air France withdrawing its remaining aircraft in May 2003 and British Airways making its last scheduled flight from JFK to Heathrow 24 October that year.  By that time Concorde was dated, with an analogue cockpit, prodigious fuel consumption, and environmentally unacceptable.

Concorde first flew from Toulouse in March 1969, and made its final sortie Heathrow to Bristol 26 November 2003.  In total 20 were built, one destroyed, and one has been broken up.  A supersonic replacement seems a long way away. www.concordesst.com