Virgin for alliance? And India 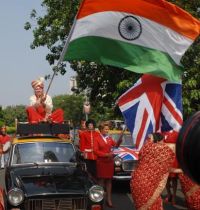 It has been an interesting week or so for Sir Richard Branson.  First he wins at least a reprieve on the West Coast Main Line, then he misses out to Moscow (whilst saying that there should be three British carriers on the route).  Undaunted it is Mumbai next with a UK trade delegation where he claims that he is going to join one of the alliances in double quick time, announcing the reintroduction of that city to Virgin after four years.  He already flies to Delhi.

No start date has yet been given for the new services but that is likely to be early next year when more Airbus A330 twin jets are delivered to the airline, kitted out in a three-class configuration.

With regard to joining an alliance, Star seems the obvious choice and a future move to the new Heathrow Terminal 2 cannot be ruled out.  Whether the value of being in the same building as its new partners would compensate for the high cost of moving the not long ago refurbished Clubhouse remains to be seen.  Any move would free up desperately needed additional space for British Airways and its oneworld partners in Terminal 3. www.virgin-atlantic.com