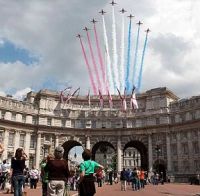 Built as a memorial to Queen Victoria, Admiralty Arch, the iconic 100-year old London building that ascetically links Trafalgar Square to The Mall and Buckingham Palace is to be turned into a 5-star hotel and restaurant.  But don’t rush to try and make a booking.  Whilst a long lease deal has been signed between the Government and Prime Investors Capital run by Spanish developer Rafael Serrano, we are unlikely to see the results until the back end of 2014.

The property is likely to be auctioned off to one of a number of major hotel companies who will use their management skills and worldwide marketing operations to secure a very high occupancy rate.  With such a prestige position the competition is likely to be close with a number of high profile groups taking an interest.  The similarly named Prime Development Company has been involved with the new upmarket Bulgari Hotel (see BTN 28 March 2011) set in the heart of Knightsbridge. www.primeinvestors.com