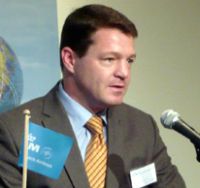 Fukuoka, the economic centre of the Kyushu region, located in the south-west of Japan, is the latest KLM Royal Dutch Airlines route target.  The airline will introduce a three times per week service from 3 November 2003.  KLM is the first airline to offer direct flights between Fukuoka and Europe.  It is the carrier’s third destination in the country, after Tokyo and Osaka.  With this new route KLM offers a total of 21 weekly frequencies to Japan in the summer of 2013.

The Kyushu has a total population of around 15m.  It is the fourth largest Japanese passenger market to Europe.  Every year, 16m passengers use Fukuoka Airport for domestic and international flights.

Flights will be operated by a Boeing 777-200ER with 35 passengers in World Business Class and 283 in Economy Class.

Says Pieter Elbers, Chief Operating Officer KLM: “With this new destination Japanese passengers have more access to Amsterdam and other European destinations beyond this hub.  This addition means a further strengthening of KLM’s network between Japan and the Netherlands”. www.klm.com