Another boost for Gatwick 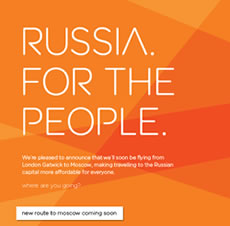 Last week Britain’s Civil Aviation Authority (CAA) confirmed that easyJet had won the hotly contested competition to replace bmi on the London – Moscow air route.  British Airways, who for many years have served the Russian capital, was confirmed as the other UK operator.  Virgin Atlantic loses out.  Aeroflot and Transaero supply bilateral services, as with BA, operating out of Heathrow.  This is another boost for Gatwick and also frees up slots at Heathrow.

Iain Osborne, CAA Director of Regulatory Policy, and Chair of the scarce capacity decision panel, said: “On balance, allocating scarce capacity to BA and easyJet is likely to deliver the greatest benefit to consumers.  easyJet’s proposal will introduce an innovative product into the market and has the potential to deliver the greatest dynamic fare benefits for consumers”.

“We concluded that easyJet’s proposal would introduce a distinctly different product into the market and would stimulate innovation on the route as a whole, as well as satisfying and stimulating consumer demand that is currently underserved, in particular: people who prefer or are content to use Gatwick”.

To cap a great week for easyJet it has also been awarded permission to operate from Milan Linate airport to Rome Fiumicino in a landmark decision by the Italian competition authority.  The airline's financial results are published tomorrow (Tuesday 30 October). www.easyjet.com