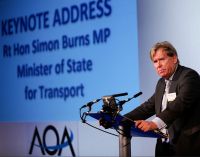 The surprise keynote speaker at the Airport Operators Association (AOA) annual conference in London, came up with a surprise himself.  Most participants expected Secretary of State for Transport Patrick McLoughlin, for what would have been his first airline industry appearance since his appointment.  What they got was his deputy Simon Burns, responsible for aviation and a surprise statement.

Mr Burns said they were an experienced team.  “Together we have clocked up more than 25 years of service as MPs, Ministers, and Whips in Government and Opposition – including for Patrick a three-year stint as Minister for Aviation in Margaret Thatcher’s last Government”.  He gave the usual platitudes about the Government’s commitment to the industry and highlighted Heathrow’s unique position.  “London has more flights to more destinations than any other city in Europe”.

When pressed by BBC journalist Andrew Neil as to whether the Government would accept the Davies Commission’s report on airport expansion Burns surprised everyone by saying “yes”, adding that he hoped all parties would support the enquiry's findings.  By delaying its publication until after the election the idea is that it will not become a political football.

The Government later appeared to backtrack from Burns' comments, with sources saying it was "committed to the process" and hoped the commission would provide solutions. www.aoa.org.uk