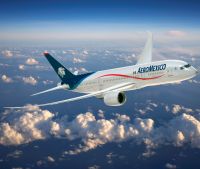 More details have emerged of Aeromexico’s London service (see BTN 22 October), with the first flight due to arrive 15:00 Saturday 15 December at Heathrow T4.  The timing means that the airline will quickly pick up some Christmas/New Year business.

Aeromexico, a Skyteam member, plans to initially use a two-class Boeing 767 on the route with a rather unique 1+2+2 setup in what it calls Premier Class (21 seats).  Tourist Class features the traditional 2+3+2.  The airline has nine Boeing 787 Dreamliners on order with the first due July 2013.  It is planned that this first aircraft will go on the London route.  The airline already flies to Madrid and Paris in Europe.

The history of Aeromexico dates back to 1934 but the airline is ultimately owned by the US financial institution Citigroup.  Currently the airline operates 44 new generation Boeing 737s with 90 MAX on order.  The eight 767s will be replaced by new 787s and in addition the carrier flies four Boeing 777 200ERs. http://eu.aeromexico.com