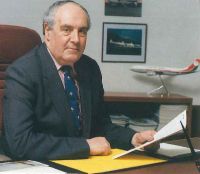 The passing of Fred Newman CBE after a short illness aged 96 marks in many ways the final chapter of the era of British independent airlines who introduced cheap flying for the masses.

In 1922 Fred’s father, Frank Newman, founded the ship broking business Davies & Newman.  After an education at The Leys School, Cambridge, Fred joined the company and set out learning the business, spending time in various continental port cities.  It must have been fun.  He learnt languages too.  Following the outbreak of World War II he joined up and saw service in Burma with the Honourable Artillery Company reaching the rank of Captain and awarded the MC.

Dan Air was founded in May 1953 as an offshoot of the shipping business and lasted for just under 40 years, at its peak with a fleet of 56 aircraft employing 4,400 staff and flying 5m passengers annually.  It became the world's largest (and last) operator of the Comet jet airliner.

Fred’s wife Peggy predeceased him in 2002.  His son Michael joined the business and his other son David became a Priest.  To his daughter Margaret and his two sons and their families we pass on the condolence of the airline industry.  Fred was a quiet man who deservedly has a senior place in the history of British aviation.