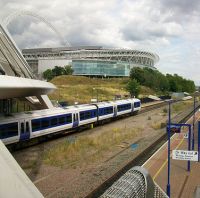 First Western, or whoever operates the Paddington to Oxford rail service in 2015, is to have competition on the route following government approval for an alternative service that uses the existing Chiltern Railways Marylebone to Birmingham line and branches off at Bicester.

Costing £130m it will be built and funded by Chiltern under a 20-year franchise.  Much of the line exists but is dilapidated and currently only suitable for freight traffic.

A new Parkway station will be built at Water Eaton Parkway in North Oxford serving the existing Park and Ride facility.  The rail link will also provide another alternative route to Wembley Stadium which Chiltern serves from Marylebone and into London from all its other stations.  Two trains per hour are planned taking just 58 minutes, eight minutes quicker than the existing Paddington services.  An entirely new station is to be constructed at Bicester. www.chilternrailways.co.uk