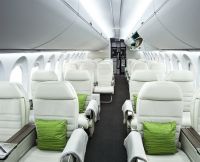 Whilst Qatar Airways CEO Akbar Al Baker will no doubt reflect on his airline’s proposed election to oneworld, comment on the New Doha International Airport delay, and update the assembly regarding Boeing and the 787, he is also likely to either discuss or answer questions regarding the Bombardier C series at the Aviation Club on Wednesday (17 October).

Two years ago Mr Al Baker confirmed an interest in the Canadian short haul aircraft.  Qatar Airways is not dogmatic in operating an all wide-bodied fleet and flies over 40 Airbus 320 series with the Neo on order.

Al Baker's concerns about the maintenance costs of the Pratt & Whitney PW1500G engines delayed a final decision on the Montreal assembled aircraft.  With the C series due to make its maiden flight in the coming months, and first airline deliveries planned for the end of next year, Qatar’s position remains uncertain, which hopefully the CEO will clear up. www.qatarairways.com