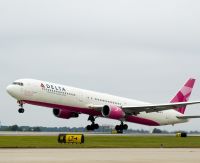 Delta Air Lines distinctive Boeing 767-400 ‘Pink Plane’ will be flying to key cities in Europe as part of its annual awareness campaign and fundraising effort for The Breast Cancer Research Foundation (BCRF).  Throughout the rest of this month the aircraft will operate to a host of European destinations including, Frankfurt, London, Madrid, Moscow and Nice.

“At Delta we are proud to support such a noteworthy cause and combined efforts from customers, employees and families in raising US$5m since we began working with the BCRF has directly contributed to 18 fully funded research grants worldwide”, said Perry Cantarutti, Delta’s Senior Vice President for Europe, Middle East and Africa.

The aircraft features BCRF’s trademarked pink ribbon logo on the tail of the aircraft and adjacent to the boarding door and is dedicated to the BCRF founder Evelyn Lauder.

Delta’s flight attendants will be wearing pink uniforms to support the cause with the proceeds from onboard sales of pink lemonade and pink headsets going to BCRF.  Delta will also donate US$1 to BCRF for the first 50,000 new ‘Likes’ on the Delta Facebook page during October. www.delta.com