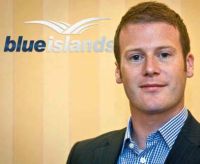 Blue Islands, an airline which operates out of Guernsey and Jersey, is to introduce services to both Amsterdam and Paris Charles de Gaulle on 4 February 2013.  The Channel Islands based carrier, originally established in 1999, says that passengers are fed up with paying the UK APD, and that in any event Gatwick, which is the main gateway, has poor international connections.

“The two routes bring with them incredible connections and opportunity”, said Managing Director, Rob Veron.  “Amsterdam and Paris are two major global hub airports that will connect Jersey to the world with hundreds more international destinations than Heathrow and Gatwick combined.  Blue Islands will now be flying direct to Geneva, Zurich, Paris and Amsterdam year-round, plus Chambery during the ski season.  This is more than any other airline and clearly illustrates our commitment to the future prosperity of our Channel Islands”.

Blue Islands will fly to Amsterdam on Tuesday, Thursday and Saturday, and to Paris on Monday, Wednesday, Friday and Saturday.  The airline serves London City twice daily six days per week.  It has a fleet of Jetstream 32 and ATR aircraft.

With 12 direct destinations Blue Islands has more services than any other airline operating into and out of the Channel Islands. www.blueislands.com