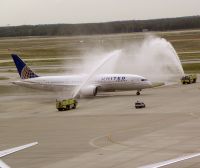 The lead Boeing 787 Dreamliner for United Airlines was delivered last week from Boeing Field in Seattle to the airline’s Houston hub.  The aircraft is the first of five new Dreamliners the airline expects to receive this year from its total order for 50 of the aircraft.  United is the first North American carrier to take delivery of the 787.

The aircraft will shortly begin a month-long training and certification programme including non-commercial flights to several of United’s domestic hubs.  As the aircraft are inducted into the fleet, they will be based at United’s Houston hub and will enter into previously announced domestic service in November and international service in December.  United is planning to operate its inaugural 787 commercial flight from Houston to Chicago 4 November 07:25.