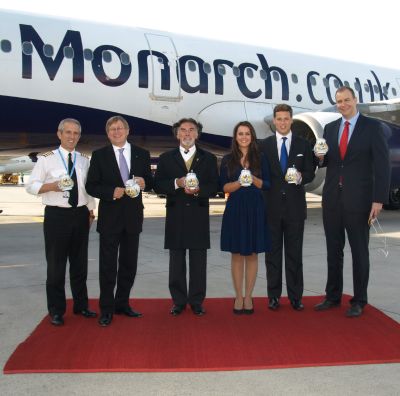 Ably filling in as doubles for William and Kate, the Duke and Duchess of Cambridge, were Andy Walker and Jody Bredo.  Standing in for Bavaria's famed King Ludwig II, who also had other commitments, was Siegfried Mathes (3rd from left). Alongside the royalty on the red carpet to celebrate the occasion were Munich Airport CEO Dr Michael Kerkloh (2nd from left), Jochen Schnadt (right), the head of Monarch Airline's commercial operations, and Flight Captain Simon Turner (left).

Monarch Airlines will now be a regular visitor to the Bavarian hub, with two departures a week scheduled to each of three English airports: Manchester, Birmingham and Luton.  With the start of the winter timetable at the end of October, the British airline will double its service on those routes to four weekly flights, and will add two weekly departures to Leeds Bradford Airport. www.monarch.co.uk