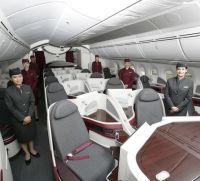 New Doha International Airport, which was due to open 12/12/12, now has a target date of June 2013 according to reports from the Gulf state.  This follows the dismissal of Lindner Depa, an interior fitting joint venture between Dubai-based Depa and Germany's Lindner.

Akbar Al Baker, who is chief of both the airport and Qatar Airways, is well known for his attention to detail and this is also reflected in the late delivery of the airline’s first Boeing 787.

Speaking to AMEInfo, the weekly Gulf region business publication, he said that the carrier is in a spat with Boeing over the quality of the cabins in its new 787 Dreamliner.  "We have a steady stream of 777 deliveries, but we have a problem with the 787.  The problem is both technical and (with) the quality of the cabin.  Qatar Airways is very meticulous about our cabins and we will not take a cabin even if there is just a scratch”.

Asked what has changed since the aircraft was displayed at the Farnborough Air Show, Al Baker explained that the aircraft was not complete.  “There were systems that were not ready”, he said.  www.ndiaproject.com