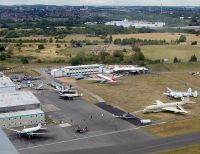 For aircraft enthusiasts in the Midlands the next couple of weeks will be the last chance to see the Coventry Airport’s iconic AIRBASE living aviation museum.  It will finally close its doors on the evening of Sunday 30 September.  The world famous collection, unique in that most of its exhibits actually fly, is moving over the winter to Newquay/Cornwall Airport, once RAF St Mawgan.  It re-opens as “The Classic Air Force” on Sunday 23 March.

Between now and the last Sunday of September visitors can see an amazing group of aircraft including the Canberra jet bomber which set the world altitude record of 71,000 ft back in 1957, several Dragon Rapides, the workhorse of domestic air routes in the 1930s and 1940s, and the oldest twin-engined jet aircraft still flying, a Gloster Meteor T7, amongst many others.

Likely to stay around for somewhat longer is the BAe Nimrod, a military early warning aircraft but the true descendent of the De Havilland Comet, the first jet airliner, and the Avro Shackleton.  Also remaining is the popular DC6 Diner, once with the US Army Air Force and now turned into an unusual and popular restaurant.  Entry until the end of the month is just £7 or £15 for a family ticket. www.airbasecoventry.com