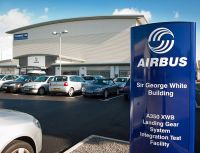 Having sold its 20% holding in Airbus in 2006 BAe Systems now says it is in advanced talks with EADS, the Airbus parent company, to create a new company that would overtake Boeing in sales and be in a strong position to deal with military cutbacks in Europe and the United States.  EADS operates the former BAe factories at Bristol and Chester.

Despite its advantages, the deal faces numerous regulatory, security and cultural hurdles and its fate is far from certain.  Through its North American subsidiaries BAe Systems sells more to the US military than the British.

French Finance Minister Pierre Moscovici issued a terse statement saying the French state would decide as a shareholder when the time comes and according to EADS governance rules.

"No one is counting their chickens just yet as it is a very complex transaction with lots of possible pitfalls, especially government related ones", said a British defence source close to the talks. www.baesystems.com www.eads.com