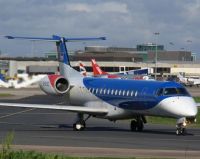 bmiBaby made its last flight on 9 September after new owner International Airlines Group (IAG) failed to find someone to buy the budget carrier.

The no-frills carrier was launched by bmi in 2002 as a budget airline to operate from UK regional airports but has consistently lost money over the last few years, its owner struggling too.  All in all it is thought that around 800 staff have been made redundant.  How the closure will affect the amount IAG, as owner of British Airways, will now pay Lufthansa for the British Midland Group has not as yet been published.  Where the airlines' 14 elderly Boeing 737-300s are going is not known either.

bmi Baby represented about 25% of the East Midlands Airport (EMA) passenger throughput, 30 routes and seven aircraft.  All but six have been taken up by Monarch, Jet2.com and Flybe.

bmi Regional, now owned by the Scottish group Sector Aviation, was sold for £8m with its headquarters moved to EMA. www.bmibaby.com