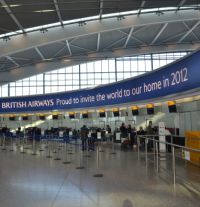 As predicted by this publication, but not the headline hungry Nationals, Heathrow sailed through the Olympics without any serious problems, and with just a slight drop in numbers.  Whilst it did have a record peak of just under 250,000 passengers this was for just one day, and augmented by the fact that the specially built Olympic centre on the southern side took most of the strain.

Total usage across its five airports for August was down 2% on the same month last year, with Heathrow seeing a fall of 1.9% to 6.5m passengers.

Stansted, the nearest major scheduled airport to Stratford, ought to have really prospered during the months but seems to have taken a real hit.  Numbers dropped 5%, the running total for the year now less than 17.5m.  New challenger Southend moved 91,000 for the month which would indicate around 800,000 passengers for the year, well above expectations.  Add this to the Stansted total and there is still a shortfall.  Whoever takes on the airport for the future has an even bigger task on their hands. www.baa.com