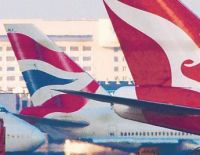 One of the aviation world’s longest running partnerships will come to an end at the completion of the winter season's flights next March.  Qantas has ditched British Airways after 17 years although the relationship goes back much further, a full take-over by BA once considered.  The privatised Australian flag carrier has agreed to a 10-year alliance with Emirates, in an effort to shore up its loss-making international business.

Qantas will replace Singapore with Dubai as its hub for European flights and coordinate pricing, sales and schedules with the Dubai-based airline.  It remains a member of oneworld.  The Qantas-Emirates alliance is deeper than a straightforward code-share arrangement but stops short of a global revenue-sharing deal or equity injection from either side.

How this will affect British Airways thinking on the ‘Kangaroo’ route remains to be seen with current operations via Bangkok (and thence Qantas) and a through service to Sydney.  In times gone by the airline served all the state capitals.  BA did not themselves issue a press release, a statement published by parent company IAG, Willie Walsh, CEO, stating the Oz business “is a small part of our overall network and this move fits in with changes in our global strategy." www.ba.com  www.qantas.com www.emirates.com