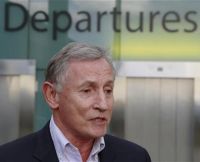 Steve Ridgway, the amiable Virgin Atlantic (VS) Chief Executive, announced his retirement yesterday (Sunday 9 September) after a 23-year career with the airline.  It is very much a soft departure with no date fixed, “Spring 2012” noted by the airline.  This will allow for a straightforward takeover of responsibilities and a structured search for his successor.

Whoever takes over at VS will find an airline at a crossroads, but with a fine reputation at the front end with “Upper Class” and both Economy and Premium Economy of a very high standard.  With the departure of bmi much of its UK feeder traffic has been lost and the airline is very much a ‘stand alone’, not part of an alliance, nor with a serious overseas partner.  Singapore Airlines owns 49% of the carrier but has never played a signifiecent part in its development.  This could change,

Virgin Atlantic is about to enter a new chapter with both the A380 and Boeing 787 on order, the A330 fleet soon up to seven, and all the gas guzzling A340s gone by the end of 2013.  The airline is bidding to bring competition back to short haul by seeking to operate flights to Manchester, Aberdeen, Edinburgh and Moscow. www.virgin-atlantic.com