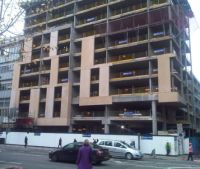 London is to gain four more Accor hotels in October; a Novotel and ibis in Blackfriars, a second ibis in Shepherd’s Bush and a new addition to the growing Mercure portfolio, opening in Greenwich.

Encompassing the latest in consumer technology, visitors to the 4-star Novotel London Blackfriars will be greeted by self-service touch screen check-in systems, in addition to the standard check-in desks.  All 182 bedrooms in the hotel include a media hub for iPads, iPods and tablets.  The new-build hotel also features restaurant, bar, seven meetings rooms, a state-of-the-art gym, sauna and swimming pool.

The contemporary ibis hotel in Shepherd’s Bush features 128 rooms and is situated next to the up-and-coming West12 centre and within five minutes of the Westfield Shopping Centre.

The 145-bed Mercure Greenwich will open its doors in October, following a major conversion of the 1930s Maurice Drummond House in Greenwich. www.accorhotels.com