By Ted Wilkinson of The Guild of Motoring Writers 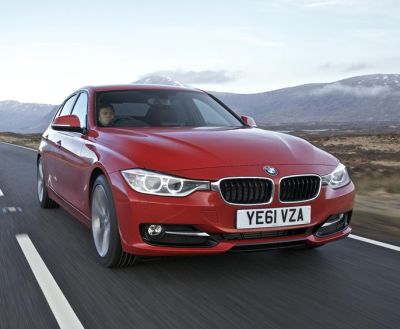 Never mind the niche market cars, there is one maker that has continuously produced a model that has dominated its market sector.  No prizes for guessing, it is the BMW 3 Series that can be had in saloon, coupe, tourer or drop head versions.

For years BMW has stuck to its game plan the for 3 Series, evolving and introducing engineering improvements, logically advancing comfort, practicality and safety to a car range renowned for the superbly competent driving character and all round performance.

The first 3 Series was introduced long before DNA was a commonly used phase but there is, in my mind’s eye evidence that if a car could have DNA then the 3 Series would have the strongest.

This asset has made the 3 Series a top-selling model, initially described by motoring writers as a junior executive model, though nowadays with the trend towards more efficient smaller size premium brand cars I suspect that there’s a lot of senior executives who have chosen the model.

I have driven a lot of successive 3 Series models over the years, one particular 328 version I liked so much that when it came off of BMW’s press fleet I tracked it down to the dealer and my sister-in-law bought it –13 years ago and it is still a much used and enjoyed car.  I suspect she is one of many such owners that subscribe to the must have factor, whether new or not so new.

Driving the latest 328i in Modern specification (and loaded with about £12,000 worth of extras) this feeling of being there before came through strongly despite the fact that every items has moved with the times.  Smart, logical, beautifully finished and, above all, just begging to be driven as it should be with a 3 Series.

OK, so the engine is a 2.0 litre turbo petrol unit rather than a 2.8 6-cylinder though who can argue when it delivers a refined 245 bhp and is recorded with a combined fuel consumption figure of 44.8 mpg in automatic transmission form.

This can be exciting!  That gearbox is selectable either by the stick shift or by paddle controls and has Sport and Economy mode options.  As I expected this car means business and is claimed to be good for 155 mph and able to hit 62 mph (100 kph) from rest in 6.1 seconds…and remember this is a very comfortable 5-seat saloon.  What is more, the majority of this performance can be achieved without even playing with the gearbox.

"This is a real car with rear wheel drive" is a comment I have heard from countless 3 Series owners and when it comes to ride and handling I appreciate what they mean.  All controls are so responsive without too much physical effort required though the driver experiences a feeling of being part of the car that is not always achieved with other contenders in the class.

What is more I found that the combination of a finely honed fully independent suspension system and medium profile Goodyear run flat tyres (no spare with this one) provided such positive handling and a standard of ride refinement that I have actually found wanting in some very recently introduced rivals.  This car’s suspension system reaches the extremes of its travel in a very smooth manner rather than indicating that it has hit the buffer stops.

So the feel good factor for driver and passengers is clearly evident and that is before taking time to appreciate the attention to detail, the engine comes with an emission/fuel saving stop+start system, the clearly faced instrumentation has colour coded dial faces, the satellite navigation/mileage indicator is also provided in face-up on the windscreen form, the generous boot space (augmented by various rear seat folding permutations) is accessed by an auto opening facility, the powered memory adjustable front seats also have an adjustable thigh support and the interior stylists have come up with a porous wood trim that looks like well washed drift wood though after a while it grows on you!  Alternative materials are available as usual.

As for styling this latest generation BMW 3 Series has more dash, is easily recognisable by its twin kidney shaped front grilles but as usual the exterior body trim is restrained…as I would expect with a car brand and model that has long proved its case. That’s how aspirations are made.

ABARTH: Two new versions of the Fiat 500 Abarth performance models have been announced.  Both are powered by a 160 bhp 1.4 T-jet.  Price from £13,975 to £20,925.  Specifications include fixed head and cabrio and manual or automatic transmissions.  We will be running a feature on the more mundane version of the popular mini car in a future edition. www.fiat.co.uk

HYUNDAI: A new website to make buying Hyundai cars more customer friendly has been launched.  The Korean car maker, founded in 1967 is currently ranked as the world’s fifth largest. www.hyundai.co.up

IAM: the Institute of Advanced Motorists has issued some advice on how to counter ‘cash for crash’ crooks.  The advice includes looking ahead and anticipating hazards ahead, keeping a safe distance from the car in front and being wary of overtaking cars cutting in.  Watch for tailgaters who attempt to disrupt the driver’s attention to create a collision with the car in front.  If there is an accident where this criminal activity is suspected make sure to photograph the damage on all vehicles and also make a 999 call. www.iam.org.uk

MERCEDES-BENZ: The price of the new Mercedes-Benz E-Class hybrid model will be £41,435. www.mercedes-benz.co.uk

PERODUA: The Malaysian made Perodua mini-sized hatch back is currently being offered on the special sales deal until 30 September of this year.  The scheme is based on a £199 deposit and 36 monthly payments of £199 and a final payment of £768.30 making a total of £8,131.30. www.perodua-uk.com

TOYOTA: The launch of Toyota’s ultra high performance GT 86 sports model will be backed by a multi-million pound advertising campaign.  The car has already proved a race-winner. www.toyota.co.uk

ROLLS-ROYCE: The three Rolls-Royce cars appearing in the closing ceremony of the Olympic Games sported new mascot/badging, for the first time in the make’s 104-year history.  The familiar Spirit of Ecstasy model on the bonnet had her flowing gown replaced with a Union Jack emblem. www.rolls-roycemotorcars.com

SEAT: Over 10,000 Seat owners have registered for Seat’s fixed price servicing package.  It costs £129 for a minor service, £39 for a MOT and £249 for a major service, the latter including free roadside assist worth according to Seat, £240. www.seat.co.uk