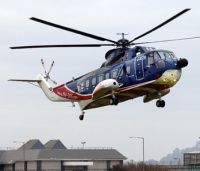 What is probably the world’s longest running helicopter service is to close at the end of October.

Initiated as BEA Helicopters in 1964, the service has carried up to 130,000 passengers a year with often 12 return flights daily.  Its successor, British International Helicopters, says that the decision to shut the route was "finally triggered by legal action taken by Tesco and two private individuals".  It said that the legal challenges of the planning process prevented the firm from completing the sale of the heliport site to Sainsbury's which would have helped in re-financing the operation and finding a new site.

Assuming that the closure goes ahead access to the Scillies will now be a monopoly provided by the Isles of Scilly Steamship Company which also owns the Scillies Skybus fixed wing services from Land's End Airport and Newquay. www.islesofscilly-travel.co.uk