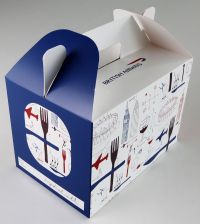 We are not sure what went into the exclusive tuck boxes produced by British Airways for the flights from Olympic training camps into London City but they seem to have done the trick.

The limited edition boxes, designed by up-and-coming British illustrator Lydia Leith, were also given away to loyal Team GB and Paralympics GB supporters throughout the Games.

The travel tuck box, which even features aircraft shaped windows, includes intricate drawings of London landmarks such as Big Ben, the Olympic Park and the Gherkin, interwoven with food and athlete references.  It includes divers launching off a dessertspoon, a shuttlecock in a glass of wine and athletes jumping over a fork.

To coincide with the Games, British Airways is serving Olympic-inspired menus on all long haul flights this summer.  The menus were produced by Michelin star chef Simon Hulstone, who was mentored by Heston Blumenthal in the BA Great Britons programme.  The menu includes popular food from 1948 – the last time the Games were held in London. https://www.greatbritons.ba.com