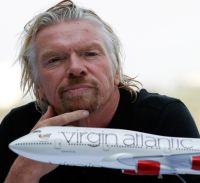 Sir Richard Branson’s Virgin Atlantic Airways last week reported a pre-tax operating loss of £80.2m in the year to the end of February compared to a profit of £18.5 the previous 12 months.  Revenues grew 3% to £2.74bn, passenger numbers by 2% to 5.4m and fuel costs rose by a third.

In a statement Virgin noted the high APD charges it needs to load onto fares.  As a long haul carrier it is a large collector of tax for HM Treasury.  In the current year oil prices are down but the airline is bound to lose connecting traffic with the BA takeover of bmi.

Virgin Atlantic continues as probably the only major European purely scheduled airline to remain outside one of the three international airline Alliances and rumours continue as to whether it might be sold or get into a serious relationship with a Middle East carrier such as Etihad.  Whilst Singapore Airlines has owned 49% of Virgin, this relationship has not been seen to be very active as far as any commercial liaison is concerned. www.fly.virgin.com