ANA to India and Myanmar 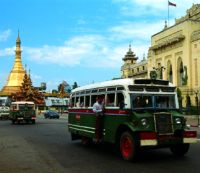 Delhi (India) and Yangon (formerly Rangoon), the commercial capital of what was once Burma but is now called Myanmar, are the latest destinations to be served by ANA, both from Narita.

Delhi will be introduced on 28 October at the start of the winter season on a daily basis and Yangon 15 October.  Delhi is already served by Air India and JAL from Narita but for Myanmar ANA has the route to itself

Now Japan’s largest ANA says plans to capitalise on the projected increase in demand for indirect flights between Asia and North America via Japan.  This will allow the carrier ANA to accelerate the expansion of its international network, which is a key pillar of its FY2012-13 corporate strategy, and further strengthen ANA’s business model as a network carrier.  www.ana.co.jp