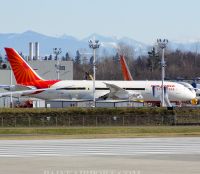 What could have been the star of Farnborough is sitting, as BTN is published, at Charleston International Airport, South Carolina.  Ready for delivery are three Boeing 787’s the subject of a very serious dispute between the aircraft manufacturer and government owned Air India.  Taking an active interest is the Indian pilots union IPCA, who are also in disagreement with the airline.

Air India has 27 Dreamliner’s on order. The delivery delay is officially over compensation by Boeing due to production problems with the aircraft which is four years late.  However ANA and Japan Airlines seem to have resolved their recompense with regard to the tardy arrival, as has Qatar Airlines, who first ‘plane is now back at Seattle getting ready for formal acceptance.

History shows that nothing moves very quickly in India.  Various Government spokesman have hinted that they expect to have resolved the problem by the end of the month.  This might be a shade optimistic.  www.boeing.com/commerical  www.airindia.com