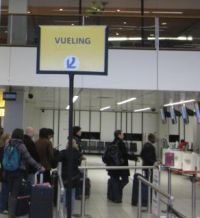 Spanish airline Vueling and British Airways have signed an interline agreement whereby all passengers on the UK airline will be able to connect directly to the 74 destinations offered by Vueling from its hub at Barcelona El Prat.  The same works in the other direction too.  Luggage checked in at the original departure point will also be tagged to the final destination if it is on a BA flight.