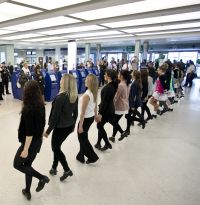 Nearly 25 years since London City Airport’s first scheduled departure (26 October 1987 – Brymon/Air France Dash 7 to Paris Charles de Gaulle), CityJet flight AF5118 from Dublin 08:50 on Wednesday 11 July 2012 marked the one millionth aircraft movement.  Air France, who own CityJet, are the only carrier to have operated at the airport through the quarter century of its existence.

As the unsuspecting passengers walked through the arrivals doors into the main terminal concourse, they were greeted with a glass of sparkling wine and an impromptu Irish dance performance from professional dancers who had been mingling with the normal Wednesday morning crowds.

Declan Collier, Chief Executive Officer, London City Airport, believes the second million flights will not take as long to achieve. “From here, we’re looking at the next million movements.  We handled 70,000 in 2011, we expect some 90,000 in 2015 and we have permission for 120,000 – although we’ll need to make some more space for that number – so it’s perfectly possible that the next million are achievable within ten years.  London City Airport has been a fantastic success story to date and we’re committed to seeing that success continue”. http://youtube/Kxg5N3gwd_4