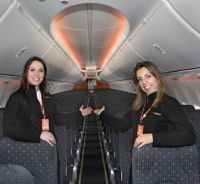 Claiming to be the largest low-cost airline in Latin America, GOL has restructured its international route network.

“These operations were strategically planned to increasingly bring more benefits to our clients in the form of broader coverage, flexible schedules, speed and safety,” says GOL’s Chief Commercial Officer, Eduardo Bernardes.  “Some of these flights will go operational this month but the majority of them are scheduled for August.”

Under the new route network, Montevideo will get a new direct daily flight from São Paulo.  Earlier, clients had to make a stopover in Porto Alegre.  Asunción which previously was served by flights via Curitiba, will now have a direct service from São Paulo.

Argentina, where GOL is already the leader in frequencies to and from Brazil, also gets new services – the number of flights between Porto Alegre and Ezeiza has been doubled, while the schedule between Buenos Aires and Florianopolis is improved. www.voegol.com