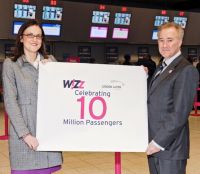 The development of plans by each party via public consultation with residents and businesses in Luton and the surrounding region has resulted in a decision by the airport’s owner and operator to integrate not dissimilar schemes although the LLAL figures were slightly more optimistic with a suggested capacity of 18.5m.  The discredited White Paper of 2003 spoke about 30m passengers by 2030.  The current record throughput is 10.3m in 2003, 10m a possibility for this year.

The heads of terms agreement signals a move towards a period of activity to finalise contracts in July, to then be followed by a planning application later in the summer, with work starting next year.

Whilst there will be an enhancement of the facilities the main elements as far as the general public is concerned is much easier road access, and the relocation of the security area to the ground floor of the terminal. www.btnews.co.uk/article/4637 www.futureluton.co.uk