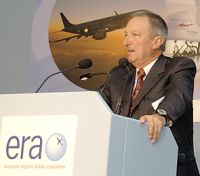 The European Regions Airline Association, commonly known as ERA, will hold its annual get together at the congenial city of Dublin, 19-21 September 2012.  Backing up the gathering is once again an exhibition of a range of companies involved in the industry.

The ERA represents some 60 intra-European airlines which annually carry 70.6m passengers on 1.6m flights to 426 destinations in 61 European countries.  It also includes more than 100 Associate and Affiliate members including airframe and engine manufacturers, airports, suppliers and service providers.

In a busy programme the future of the regional industry will be highlighted both in structural form and aircraft finance.

The Dublin gathering will be Director General Mike Ambrose’s last formal appearance after 25 years in the position.  He retires at the end of 2012 to be replaced by Simon McNamara, currently his deputy.  Simon, a Cranfield graduate, has been with ERA for over 10 years and previously with the International Federation of Airline Pilot Associations (IFALPA). www.eraa.org