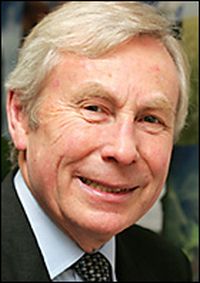 He was Chairman of British Airways from 1993 until 2004 and was previously Chief Executive Officer from 1983 taking it through privatisation.  The genial Marshal was in many ways ‘hands on’, always ready to stop and talk to staff and customers alike.

Colin Marshal was educated at University College Grammar School in North London and like many from his era left school at the age of 16.  His interest in travel resulted in joining Orient Line (now part of P&O) as a Cadet Purser in 1951 and he was later to say that introducing a brand new-build ship was far more fun than collecting an aircraft from Seattle.

A long and distinguished business career followed including President and Chief Executive of Avis Inc in 1976, based in New York.  From May 1996 to July 1998 he was President of the Confederation of British Industry and chaired the CBI International Advisory Board.  He stepped down as Chairman of VisitBritain in 2006 and until recently was Chairman of both Nomura International and Pirelli UK.

Colin was always interested in sport and was Chairman of the Queen's Club from 2007 to 2010 and also a member of the All England Lawn Tennis & Croquet Club (Wimbledon).  He was a lifelong Arsenal supporter.