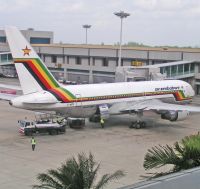 Ailing Air Zimbabwe has suspended domestic services barely two months after it resumed flights.  Last week President Robert Mugabe made a connection to Johannesburg and on to Singapore for medical reasons.

The struggling airline suspended its domestic flights to Harare, Bulawayo and Victoria Falls after grounding one of its Boeing 737 aircraft, which had been servicing the routes, for C-check and corrosion inspection.

Air Zimbabwe resumed flight services in early May after grounding its planes for almost four months since January when it suspended domestic, regional and international flights overcome by debts, industrial action by key personnel including pilots and engineers, and fear that some of its planes could be seized to recover debts.

The suspension of flights is the latest setback for the airline which is now famous for poor service and bungling and had been battling to regain passenger confidence.

Once one of the best airlines in Africa, Air Zimbabwe has been run down due to successive years of mismanagement and inadequate funding. www.airzimbabwe.com