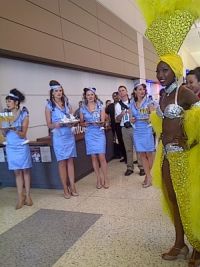 Virgin Atlantic was the first airline to land at Las Vegas McCarran International Airport's brand new, high-tech Terminal 3, which is now open.  Just like the airline’s original maiden flight over a decade ago, also from Gatwick, the 747 was met by Las Vegas Show Girls in a true Vegas-style celebration.

"When Virgin Atlantic first started flying between London and Las Vegas we had two flights a week; now, 12 years on, we fly daily to London and twice a week to Manchester", said Chris Rossi, Virgin Atlantic's Senior Vice President, North America.  "The timing of the new terminal opening perfectly coincides with our recent investment into refitting our London Gatwick-based aircraft.  Our passengers will enjoy much bigger seats in both Economy and Premium Economy, the latest in on-demand, touch-screen entertainment, newly designed menus in every class of service, and the Virgin Atlantic style we're famous for".

Las Vegas is now also served from Heathrow by British Airways, who are introducing a three times a week Manchester service from 29 November.  Condor is the only other European operator into Las Vegas with a twice weekly service from Frankfurt.  www.mccarran.com