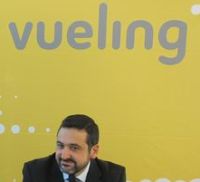 Alex Cruz is CEO of Vueling and is a US educated Spaniard whose home is in London.  He is the guest of the Aviation Club at the Institute of Directors on Thursday (5 July).

Vueling itself was launched as a budget airline in 2004, and merged with Clickair, a Cruz creation, in 2006.  Last week Vueling announced that it has carried 50m passengers.  It now describes itself as a “new generation” carrier and with a 91% point to point punctuality, and on some routes with half the passengers flying on business, it has certainly broken the budget mould, whilst still remaining low fare.

Cruz says that the airline is totally independent of IAG, who have a 46% interest, and the carrier is profitable to the tune of €10.4m last year.  In spite of Spain’s problems, but also due to falling fuel prices, it should make at least that in 2012.

Vueling is the only non full-service airline to offer connecting services, which it does at Barcelona charging up to €10 and the combined sector fares.  The carrier says it is a “win-win” situation and involves no discounting.

In the UK it operates Heathrow to Bilbao, Galicia, La Coruna and Vigo; Cardiff to Barcelona, Palma and Alicante and Southampton and Edinburgh to Barcelona. www.vueling.com