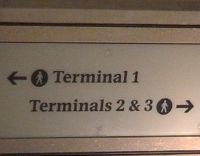 British Airways has announced its winter domestic programme, marking the major part of its rescheduling following the takeover of bmi.  The airline has already taken over bmi’s six daily flights to Belfast, and will be launching a new timetable of seven services between London and the Northern Ireland capital on 28 October.

New for BA (BMA dropped the route many years back) is a four times daily rotation starting from 28 October, Heathrow to Leeds Bradford, which is very good news for Yorkshire and the North in general.

One serious problem for travellers, which will not be solved until the new T2 is opened, is that for at least this coming winter the airline will serve T1, T3 and T5.  With the extra flight Belfast stays in T1, and also Hannover.  Business Travel News reiterates its waning for people coming from Aberdeen this summer.  Check which terminal you finish up at.

Scotland is somewhat controversial, the services being watched suspiciously north of the border.  Whilst BA says it will use larger aircraft, the two extra flights between Heathrow and both Aberdeen and Edinburgh do not fully compensate for loss of frequencies and seats.  Fares are also being very carefully monitored. www.ba.com