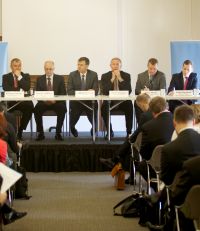 Willie Walsh and Brendan Barber, General Secretary, Trades Union Congress, could not be considered the most obvious of bedfellows but they got together at an Aviation Foundation Westminster media briefing last week calling upon the Government to adopt four key tests to secure a credible and lasting aviation policy.  Joining them were Colin Matthews and Charlie Cornish, respective CEOs of BAA and Manchester Airports Group, Steve Ridgeway, CEO, Virgin Atlantic and John Longworth, Director General of the British Chambers of Commerce.

The key tests are:

1. Deliver a clear policy conclusion that can be progressed without further delay.

2. Aim for cross-party consensus and a commitment that lasts beyond the term of one Parliament and ensures the policy will be implemented.

4. Be based on a policy process that has considered all options rationally and objectively on their merits.

In a statement the Foundation noted that the tests are designed to ensure the forthcoming Government consultation on aviation policy does not become a pretext for further delay.  British politicians have debated this point for almost 50 years without effective action. SEE ALSO 'ON TOUR' BELOW.