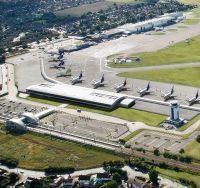 The performances of the London airports were in sharp contrast last week when the passenger numbers for May were published.

For Gatwick the results were positive, up 2% for the month and 4% on a rolling annual basis.  Europe did best with a 9.3% rise on scheduled services.  The trend to larger aircraft continued movements for the month down 1.2%.  The airport could top 34m in 2012, getting closer to the 35.2m 2007 record.

For Stansted the news was not so good with the numbers down 5.5% over the same month last year.  At the rejuvenated Southend the annual throughput is now running at half a million passengers, more or less what the loss may be for Stansted over the same period.  With easyJet introducing more destinations and frequencies in the year ahead the airport is well on its way to its 2m target for 2020.  Stansted’s main problem is that of ownership, the management, and potential airline customers not sure who will be in charge in 12 months’ time.

London City looks like topping 3m passengers this year, the best since 2008.  At Luton the numbers are up on last year and approaching the 10.2m record throughput also of 2008. www.caa.co.uk