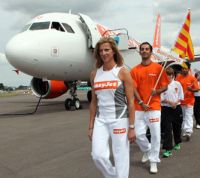 Gatwick Airport is to welcome Olympic athletes over the coming weeks with the news that Jordan has become the first country to make a budget airline its official Olympic Games carrier, choosing easyJet.  The airline flies three times per week between the South London airport and Amman.  It is also the first instance of a UK carrier sponsoring a foreign team.

Lana al-Jaghbeer, Secretary-General of Jordan’s Olympic Committee, said: “In today’s financial climate, sponsorship is crucial for our athletes and this contribution is very much appreciated by all”.

Jordan has nine confirmed athletes set to compete in the Olympics, and may add more.  Two wrestlers and the national basketball team to the roster,  subject to qualification.  In the Paralympics 14 athletes will be competing.

easyJet expects to fly about 75 people, which includes the team support staff, as part of its sponsorship deal.

EasyJet launched the route last March.  It is the airline’s longest route and just within the duty hour limits for aircrew without having to night-stop.  With the 200th anniversary of the discovery of Petra being celebrated later this year it is proving to be very popular. www.easyjet.com